They should my oncologist ordered a chest x Ray with the CT scan. Apparently that is how it is meant to be done. I’d be asking for one if you are worried. It’s not unreasonable.

How's the radio silence been? Have you missed us?

Haven't heard from you in a while. Figured you might have died from cancer or boredom. Which ever may be more aggressive. Same rule applies, for cancer and boredom, as it does for Coronavirus. If you fall down and look dead, your friends are allowed to poke your dead corpse with a stick. It has to be a long stick though, as Coronavirus and boredom are contagious.

I'd tell you how I am, but first I want evidence you are still dancing.

I do have to share some sad news with you. They killed Kenny! Those bastards!

Hey @PhilPepper and everyone else, I hope you are all doing well 😘

How are you all going in the current climate?

Here's a little Monday song for you all!

Don't be strangers! I'll be here no matter what, as will the rest of my team, to support you however best we can - even if it's sharing the silliest songs we can find 🤣

I was working from home for a while while I was finishing my chemo and my final surgery. it was a well timed short stint contract role. Then 2 months ago I started working in the city again. Now they are sending me to work from home. The luxury of being an IT nerd. This may be good for the nation, demonstrating how large numbers of people can work remotely, saving on floor space, transport and parking for inner city professionals.

I don't feel I need to be working from home, nor many others, but it will be a great social experiment.

Glad to hear you're back with us mate. I thought we'd scared you off.

I did the whole work from home thing before I got sick. I worked from home for a couple of years.

The novelty wears off pretty quick, but that might be because of how many hours I had to spend glued to my screen.  After a while, I would go into the office just to have a break.

I'm currently working from home again (thanks to the virus) for the past couple of weeks.

I make sure I do the school drop off to school each day just so that I get a bit of face to face social interaction.

Best of luck with it.

Phil! Gang!
Kenny was such a legend. I dunno about you but the gambler is probably one of my fave songs. How are you? What’s been going on? How are you coping with the end of days?

I’m not dead- that I promise. Bored yes, dead no. I disappeared down the rabbit warren of trying to work, keep my medical appointments up, survive the insane bushfire season and was just starting to feel a little cocky- then BAM, a freaking pandemic.
At this stage, I’d love some friends to hit me with a stick. Or anything actually. As it is- we’re just FaceTiming dinner, sunsets, banal and beautiful stuff like dew drops on spider webs and watching Way way way too much Netflix. Bonus is I’m getting fat. Like good and proper podge. Dunno about you, but that’s a good thing. Means I’ll survive rationing for a bit longer.
Too early? Is it too early for jokes. Probably yes.
But you know what? I reckon us cancer kin have two secret weapons, humour and experience. We’ve faced this sort of stuff before- like we’re the oracles of apocalypse- we’ve totally bunkered down away from people, we’ve had to go without certain foods or meds, we’ve faced mortality head on. We’ve had to limit visitors, been unable to take public transport. The list goes on and on. I’m feeling quite chipper considering.
By the way, sorry I disappeared for a bit- no excuses, just needed to step out. Sure you know the feeling!

Did you see the white rabbit down there? I seen the mad hatter while I've been away. In the bathroom mirror of course. You know... Lunatics... Asylum... taking over... etc.

So I too have no excuse. Just trying to get on with that life I went through all that crap to preserve. My rabbit hole involved some serious re-evaluation of life priorities and dealing with some unexpected and shocking recovery hurdles. After it all settled down, I was consumed by my new job. Hasn't been all bad though. I got to see Jimmy Barnes in concert, then Ian Moss and then Cold Chisel over a few months. 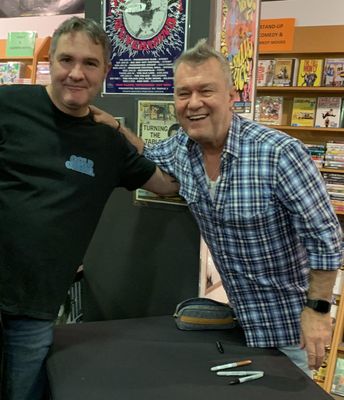 I'm the one with the stupid star struck grin.

Just to top that off, Elton John in Feb. 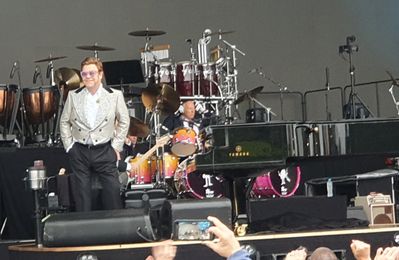 And just to top that off, I'm sitting here enjoying ash brie and bikkies for dessert.

Also been learning to play some new songs, mostly ballads. She by Elvis Costello, If you could read my mind by Gordon Lightfoot, Promises by Eric Clapton, Wearing the inside out by Pink Floyd, and Life on Mars by David Bowie. Best part is I have my singing voice back after in was totally wrecked by chemo and trying to sing along with Jimmy Barnes.

In the meantime, I too have been working on becoming Portly Phil. Since Pepper is no longer with me, Portly Phil may be my new profile name. Speaking of which, my profile picture needs an update.

I also discovered something new about myself. I watched the movie Bucket List (on Netflix) a couple of nights ago. I watched it before and thought it was a seriously funny movie. This time, cried most of the way through it. I think cancer has f!@#$%d me up somehow, in a way I didn't expect. Watch this space. I think I have issues.

I have a quote from the movie re the fleeting passing of time. "Like smoke through a keyhole". Woooo! Deep.

I think the crap my wife and I faced last yeah was enough to just make us not give a toss about the virus. At this point, more concerned about job security. It makes life a little more interesting, seeing the empty streets and closed shops. Reminds me of when I was a kid and all the shops were shut on Sundays. More nostalgic than end of days.

And to answer your question... No, not too early. Jokes should have started as soon as "Scotty from marketing" started using the virus for his next election campaign.

How is the Cherry tree?

Yes. I was scared. Scared me good. I think it was because of that guy bitching about how chemo sucks balls. Scary guy!

I would choose to still work in the city. The lack of traffic, ample parking (funny... they just sang "ample parking" on the start of South Park), no queues for the takeaway coffee and less people at to work distract you.

I've been reading on occasion but not taking the time to answer. This thread seemed to stop, which was a little sad, but I felt we had broken the record.

I hope you are well.

It's great to see you around when you pop in, and pardon me for saying so, but you look fantastic!

Nothing stays still for too long.

New faces arrive, new threads start up. That's the funny thing, right. Life goes on, whether we're here or not.

How is your wife?

need a Thursday song for tomorrow

And don't forget to wear purple.