An old time favourite from my youth.

I remember it being on the radio, I was in primary school back then

Rick! No conversation killers here- just tardiness on my response, I kind slipped into the pajama, couch, movie sinkhole thing where you only come up for air, food, and meds. Even now, I'm dressed but the TV is on pause ready for another few hours of mindless absorption. I did make it out to the garden to pick some greens for my morning smoothie which is progress I suppose.

Totally agree- choosing your attitude is everything-I do remember Fish! The approach is similar to something we do in Tibetan Buddhism of checking in. Setting a daily intention, checking whether you did it and then not beating yourself up about it, but trying to stick to it the next day. I really Love the guerilla-style owning of the disease with evangelical conversation starters-it's brilliant. It's something I'd love to understand a bit more.

Possibly because I'm starting to deal with return to pre-diagnosis stuff and I'm starting to get a bit worried about it all. As background, From the date of my surgery (10th of August), I've been given until the 17th of September to recover. I should note I had surgery just before that too. So back to back I've had 2 surgeries- one on the 6th of July, one on the 10th of August, cancer diagnosis in the middle and now I have just shy of 3 weeks to get back to "normal". I have an oncology appointment on the 17th of September, where we'll talk about treatment, physio etc, and my boss has already started asking me when I'm coming back. It's freaking me out.

I'm not ready, physically, there's a whole bunch of things that just aren't working right yet, bathroom stuff, I can't drive, can't sit up for longer than an hour, sleep is still a mess, but I'm also still a bit of a mess mentally too. I don't feel mentally strong enough for the 100 conversations with co-workers in hallways about my health.

We live rurally, 1.5 hours out of Melbourne, in the middle of potato country. If someone wants to visit I'm so thankful because it's a massive hike to get here and back. It's weird, I'm okay with those kinds of conversations, the intimate chats and catching up over lunch at home, but the idea of putting on work clothes (pants are an issue right now! TMI!) , getting to the train station (34 minutes from here), on the train (1 hour from melbourne), walking from the train to work (15 minutes) and then doing a day of work fills me with tiredness and dread before I even start.

How did you go about that? I'd love to hear about how you transitioned from recovery back into the "light"....

By the way, Phil says you have cows. We still need photos of cows.

Workplace conversations. I avoided telling people at work, but word is spreading and people stop for the chat.

When I started my journey, I reflected on how I'd avoid talking to people if they had cancer, but if I had to talk to them, just act natural and don't bring up the C word. Whilst reflecting from my new position of wisdom, I thought I was just being a coward and I should have reached out while the opportunity was there.

Now, back at work (but not today), dealing with colleagues who want to start talking about my health in an open office, I struggle to answer simple questions like How are you today?" I could be polite and say I'm fine when I really feel like a shipwreck. The conversations can be so long and I don't like to be rude, but it's hard enough to focus at work. I'm not doing full hours again yet and there isn't much time to feel like I'm contributing.

Sorry Claire, chemo brain has me today. Not sure if my rambling is going anywhere. Hopefully a few people in your workplace will just treat you normally and not want to dredge up stuff.

I've made it out into the warm sun this morning but not for long. I think I'll curl up in bed until my lovely wife returns home.

It is a good song.  Jut this afternoon my daughter told me she doesn't like Mondays as she doesn't get to see me.  Immediately that song went through my head but I didn't mention it to her - too young to know it!  Made me smile though.

17th September?  That's probably just an estimation and I am sure you could get more time off work.  You absolutely do not sound ready to go to work, especially with the travel involved.

I agree with all of you about discussing this subject.  I've done all the talking I intend to do.  I want this chapter to be over soon.  I want to get back to normal but I'm not sure if things will ever get back to normal.  I  went to the fish shop today and the green grocer.  I am making progress with small journeys and seeing people who know me.  Butcher and Dutch shop on Friday.  No one said anything about my broken mouth.  I am understood and that's all that really matters.

I have kept my family away from me and at a distance to some degree.  I've told them I can't afford to get sick, I'm too unwell to go to family gatherings in past few weeks, etc.  They're all excited and happy as my treatment will finish on the 11th September - 7 more treatments to go.  They want to have a party and for everything to go back to normal.  I'm told the after effects of the Radiotherapy will get worse once treatment finishes, so I'm a little unsure as yet.  My sisters also want to catch up after treatment finishes.

I just don't know what normal will be.  Perhaps it will be better.  Perhaps it's an alarm that says life is short get on with all the things you still want to do.   I am starting to clean windows and that's a good sign for me because it means Spring is coming, or here, and I need to get the house ready for all the happy and wonderful times ahead.  Perhaps I can focus on that.

I have lost my taste buds in the last week and it's really strange that everything tastes bland and not even ice cream tastes sweet anymore.  It has inspired me to cook more in the future.  I've always loved cooking but now I've pulled out my French cook books and I am planning a feast of wonderful foods over the coming months.  Never again will I take taste for granted.

I've loved all your posts people!  It's good to have others along for this journey and to share our experiences.

I find that if someone has asked me how I am, I answer truthfully,  & they usually don't ask me again .   I'm sure they try to avoid me because they don't know what to say to you if you tell them you're feeling like crap & have just had one of the most horrendous days of your life.  Even some of my siblings no longer ask how I'm going, unless they feel like they really have to.  That's what it seems like, anyway .

I'm in the middle of a 2 week holiday with my husband, so have had a bit of catch up reading to do.

Re what I've learned from my cancer experience; you guys have done an excellent job of covering most things.   Really the only thing more I can offer is - don't look a gift horse in the mouth.  If someone asks if there's anything they can do for you, take them up on the offer.   Initially , I didn't want anyone to do anything for me, as I didn't want to lose control.  I saw it as losing my independence.  Now, I'll gladly accept help when I can, & I'll also ask for help if I need it.

I have been too exhausted for too long to knock back an offer of help these days.

Cheese - there is no life without cheese!

I've got the rest of this week visiting family around NSW & Canberra, then the weekend alone with hubby before he goes back to work.   Not much time for him to relax as he does all the driving these days.

Cows... little ones at any rate. This  is back in Dec when they were up to about a month old.

One mum was left in charge of creche for the morning. 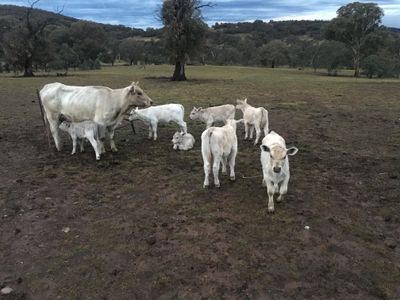 @Lehiatus - Take it easy and concentrate on you!

Returning to work won't be any fun at all, especially with a commute like that. Are you able to maybe chat to your boss and work remotely a few days a week until you're up to it and maybe just go in one day a week, work your way up slowly?

Here are some things to take a look at that may be of interest around the subject of returning to work:

I hope you enjoyed the sun yesterday @PhilPepper, it's stunning day here looking over to the Sydney CBD and out over towards the Harbour! ☀️

@Lampwork54, glad you were able to smile

You're way ahead of me on the spring cleaning, I don't even want to think about my windows!!

Oh how lovely @Budgie, enjoy the rest of your trip